I normally don’t post a photo that I have not taken. That’s not the purpose of this site. But when it comes to my children – Jennifer and Dustin… that rule is sometimes broken.

I am very active with my children’s music in school. Jennifer plays the bass in orchestra (yes, it’s taller then her) and she’s the Co-Captain of the Colorguard with the Marching Band and Dustin plays the trumpet with Marching band, Concert band and Jazz band. Yes. ALL 3 bands… and I must say as a parent, I love watching him march with the marching band, but I love to hear him play with the Jazz band.

As an active parent – I am the webmaster for the Legend Titan Band, I’m the Colorguard Mom (I support the instructor, I help make the girls look great before a show and I am a shoulder to cry on, lean on when it gets stressful before / after a show) and I’m the Spirit Wear Mom – selling t-shirts, calendars, waterbottles, car decals, etc. – all that supports the band. Phewww – that’s a lot.

So when there was a band concert a few weeks ago – my duties as photographer and Spirit Mom clashed. We set up a table and a few moms and I sold our shirts, and normally I would duck out for a few minutes and go take pictures of the band rehearsing. As the photographer for the website, I am one of very few (Ok, I think I’m the only right now) that has the privilege to get up on the stage and take pictures during rehearsal. Of course during the concert this is just not possible, and personally, that’s when I want to become a parent and enjoy the show.

Normally, I’ll spend about 15 to 20 minutes getting pictures of all the bands, this is a feeder concert, so schools from the Elementary and Middle School will perform with the High School. But this time – I was unable to take pictures. There was a rush of questions at our booth, so when it came to take pictures, I gave the camera to my budding photographer Jennifer, gave her a few guide lines to work with on settings and sent her on her way. I knew she could do it and that all would be ok.

Normally – I would have looked at the pictures as soon as I got home. But with teens, there is no such thing as normal. Other school activities got in the way, time got to the better of us and today I just sat down to view the pictures.

Can I not just say wow?! Really. WOW! I will admit, shooting a concert venue in a dark lit room is much different then shooting a wedding in a church. The lighting is totally different and though I have the wedding, receptions, party events down pat – taking pictures at my child’s concert is something I have struggled with over the past few years. With the advice I gave Jennifer before she ran off to take pictures, was something I was going to personally try myself to see if I could do better with the dark theater. It paid off!

I was really pleased with her work – and I’m proud how she has come through with her photography (she wants to become a fashion photographer).

Oh – and Dustin? I’ve taught Jennifer well, when it comes to the band website, we don’t play favoritism, so you will not see a ton of photos of my children there. You will see photos of them, but they are not plastered everywhere. But I do normally capture a few good photos of Dustin during rehearsal and this was one thing I forgot to tell her. The above photo was the best one she caught of Dustin. He was performing with the Jazz band (and then would later be on the stage with the high school concert band) – so in case you can’t find the 5′ 10″ and 3/4’s boy that is still growing like a weed… I highlighted him below: 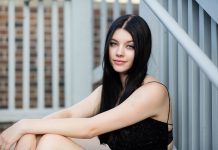