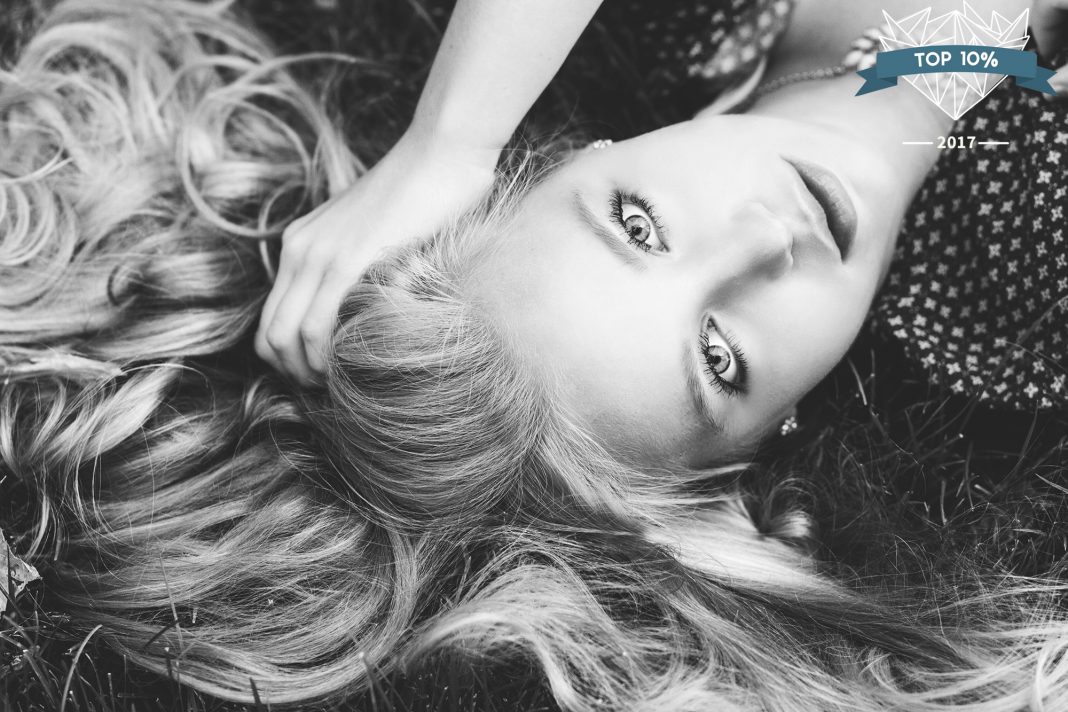 I mentioned in my last newsletter that I entered a photography contest in February. I have decided to put myself out there more this year and have more of my worked critiqued. I submitted 46 images to an international photography vote online contest. In categories such as weddings, seniors, babies, portraits, families and a few others – I submitted some of my all time favorite images over the past 2 years. That was no easy task in itself.

In early February, voting started and anyone could vote. I had a lot of friends who asked if they could vote when they heard about what I was doing but I didn’t promote it a lot because I was nervous about entering. With over 332,768 images entered – odds you weren’t going to see my work very often. I couldn’t put my logo or any other reference of my name on the image, it was voting on pure gut. Out of 4 images displayed, what was your favorite? Easy? Sometimes.

Every 2 days based on voting, the bottom 10% of images in each category were eliminated and then those still remaining went to the next round and then repeat every 2 days. Random categories would appear, I would vote on the image I liked out of 4 images displayed and then another set of images in a category would appear to vote on. I voted on weddings, brides, families, babies, wanderlust, whatever the category appeared on my screen. If you really liked an image, you could ‘heart’ the image and then see how it places at the end of the contest. I was able to see how I was sorta of doing as there were hearts on my login panel meaning someone liked my photo. 35 other people liked one or more of my images and wanted to know how they placed. (*Cool) I would not know till a month later how I really did, I was on pins and needles a lot. I also ‘hearted; other images during the voting process and can’t wait to see how they did.

How did you do Susan?

Here are the stats: 332,768 images from 141 countries were submitted. 104,378 people voted but they voted on many images so there was a total of 49 million votes. Pretty cool huh? During the times I had time to vote, a few of my images came across my voting panel – which of course I would vote on. Based on the hearts I received daily gave me a clue that I was still making it in the rounds. A few other photographers and I would look out for each other so that was another indicator that I had images in. Out of 12 rounds with voting all of February in place I made it to either Round 8 or 9 (I made it to 9). I stopped receiving hearts shortly after round 8 and as the images were being eliminated – the top images were being repeated a lot and I was not seeing any of my work.

How cool is that? I think to make it to round 8 or 9 out of 332,768 images – that’s what I call “Awesome-sauce”. I saw some really inspiring photos that I want to try on my own, new trends with seniors and I wasn’t too far off with other photographers that were upset at the trend of making Senior Girls look much older than they are in poses that don’t seem natural to a 17/18 year old girl. My fellow photographers said I had ‘authentic natural looking seniors’. 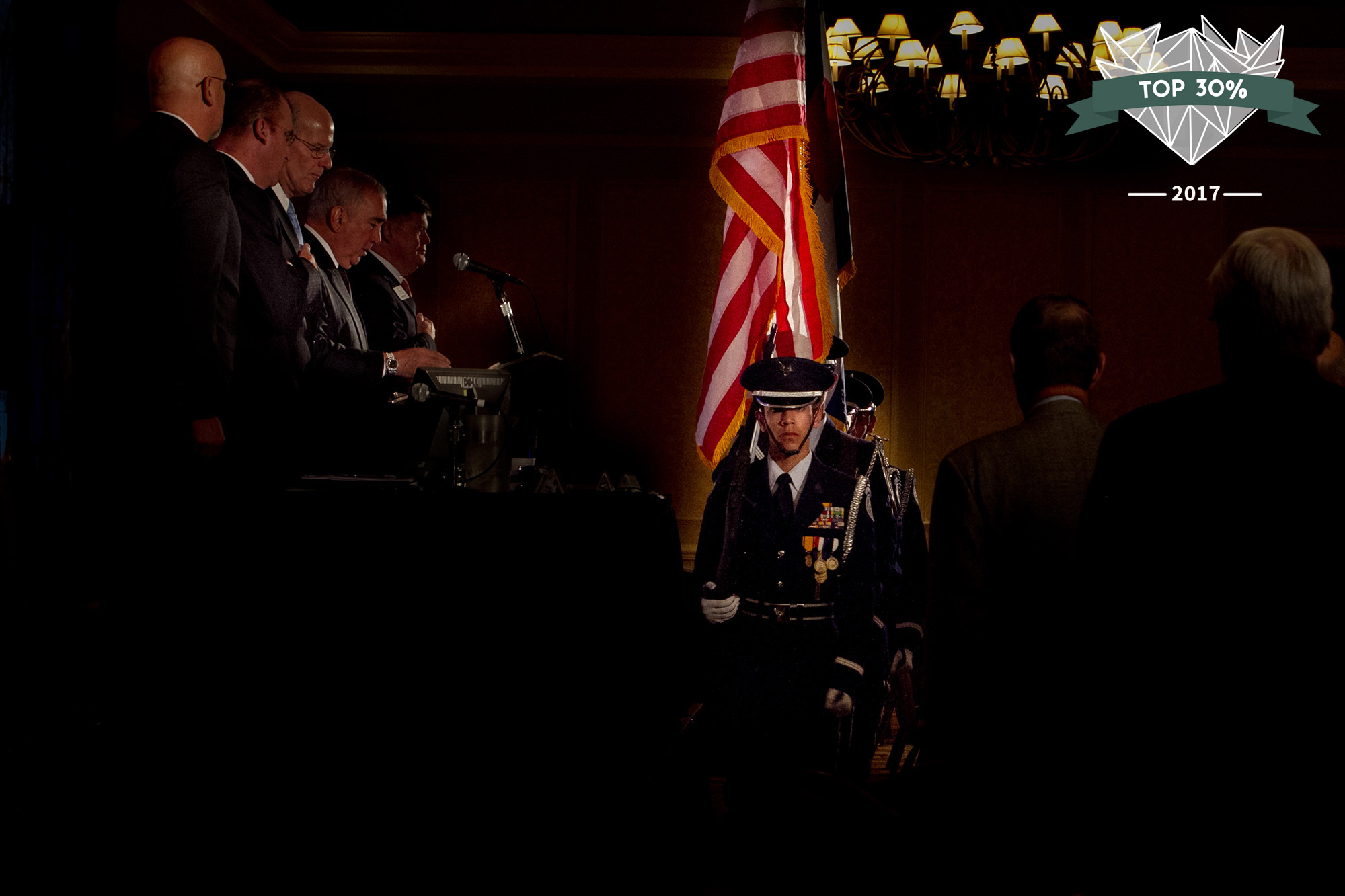 Round 6/12 Placed 2,655 out of 11,400 images in the Category – Personal Work
Here’s a shocker. This image really isn’t a great image. Oh it’s patriotic and I did some really big touch ups to it – but the “secret in the sauce” or the moment that this was taken, it really shouldn’t have happened. It’s hard to be a photographer when the guard is coming in and you are also of former military service. Your instinct is to stop and salute but as a photographer, that guideline can be broken. Some of the best photos taken around the world is during the raising or lowering of our flag. So in a quick moment I’m realizing it’s ok to take pictures, (that I won’t have to drop and give 20 push-ups for not saluting the flag) the guard is coming at me, I didn’t think fast enough on my settings and the original photo isn’t. really. hot. Yep. Huge secret. It’s out of the bag. But I still loved the photo, knowing what is going on all around the picture – I had to save it. So with some touching up, darkening the outer edges, spotlight on the guard it has become an all time favorite of mine, digital wise. What I love is knowing that on the left, standing at the podium is retired 4-star generals, vice admirals and the elite of the military and on the right is other retired officers of our military saluting our flag. It’s just so patriotic. So sometimes the crappiest photo can still be your most favorite. 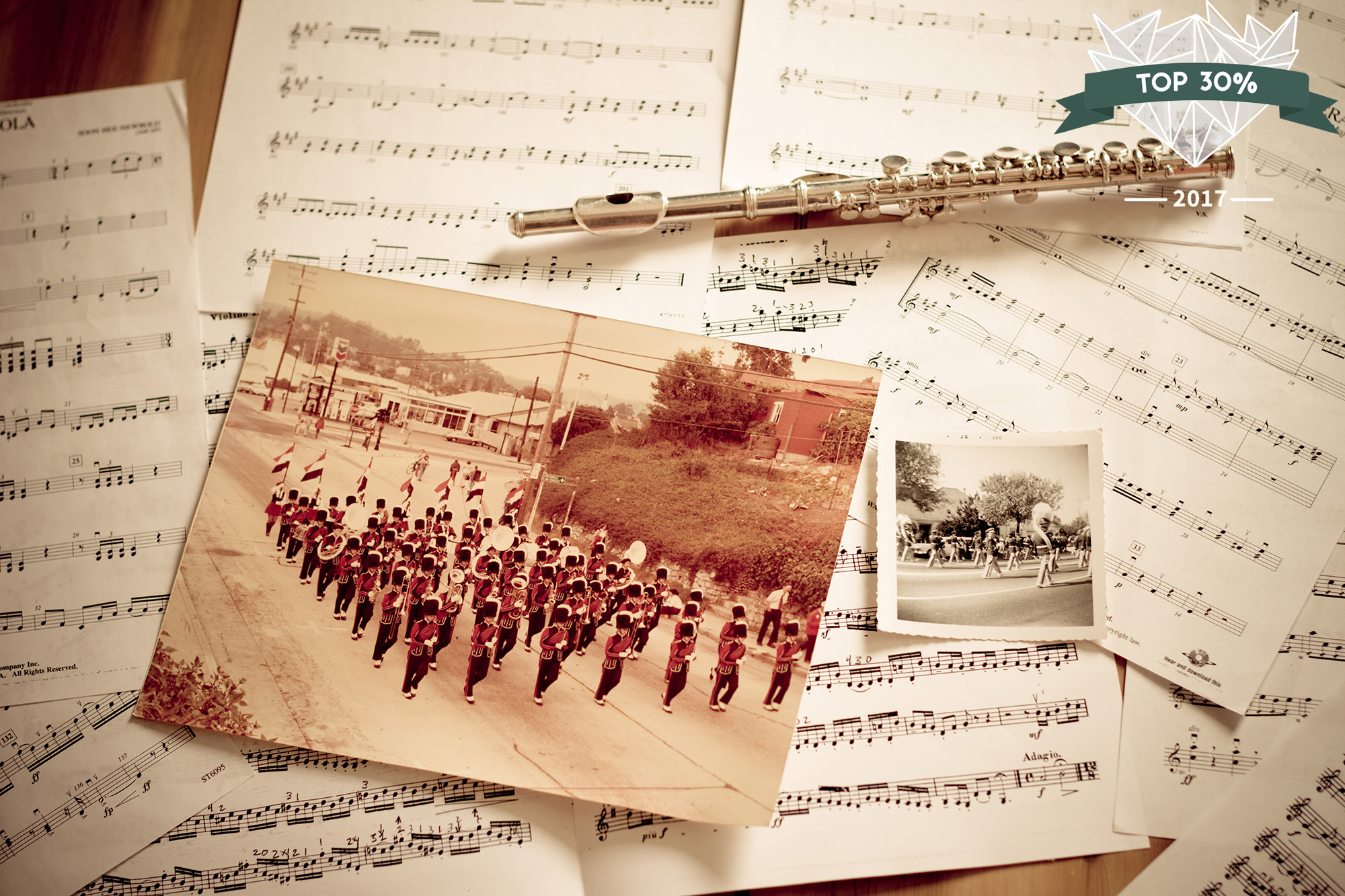 Round 6/12 Placed 2,674 out of 11,400 images in the Category – Personal Work
Not far behind in Personal Work, and was actually a last minute submission, is another favorite of mine (they all are!!) and I was surprised how my Personal Work images placed over my Senior images. When a client comes in with some pretty cool props, I like to try and make a really nice piece of art work for them. This image has a lot of special meanings. The Senior brought in her piccolo that both her mom and grandmother played when they were in band, and the photos are of her parents in their high school marching band and her grandparents in their high school marching band. Both sets of parents met in high school… wait for it… in band! You can imagine there was some fun family pressure on this senior and her other sisters who were in band as well. Love this family. So to see it do this well in the contest. I’m on the right track. 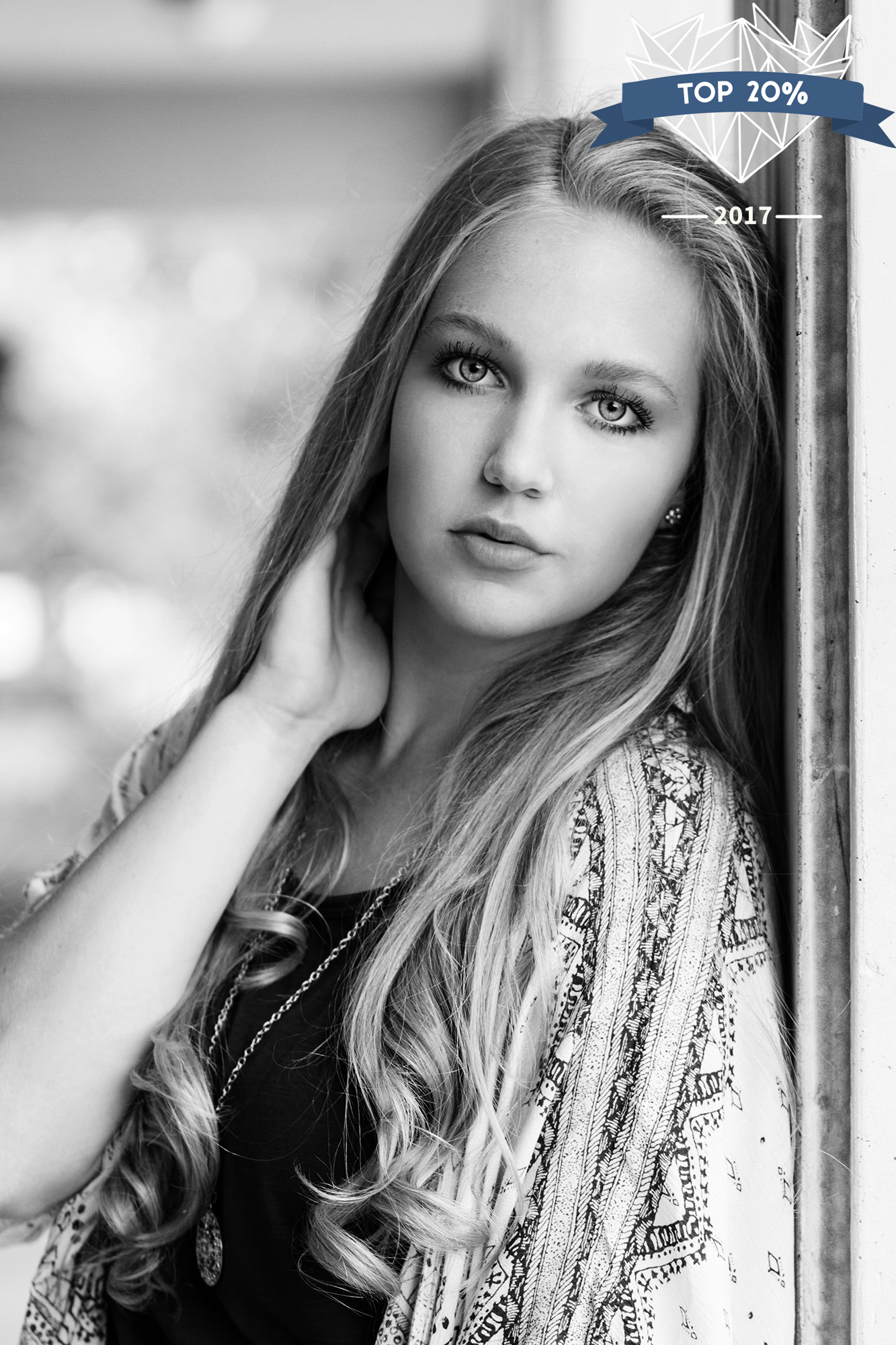 Round 7/12 Placed 2,549 out of 20,266 images in the Category: Seniors
Did you see that? 20%!! – 20,666 SENIOR IMAGES. YES. SENIOR. I do know that wedding’s were much more higher in submissions but that’s a lot of seniors! My favorite of this? When she see’s this she’s going to flip. Black and white images – if I could photograph all my sessions that way, I would do it. She was a dream to work with and I think I promised her an hour of shooting but we were out for like 2 and then she came back in later with her prom dress and I could have photographed her for another 2 hours if I could. Really Jill? – you made this so easy for me. xoxo – love you! 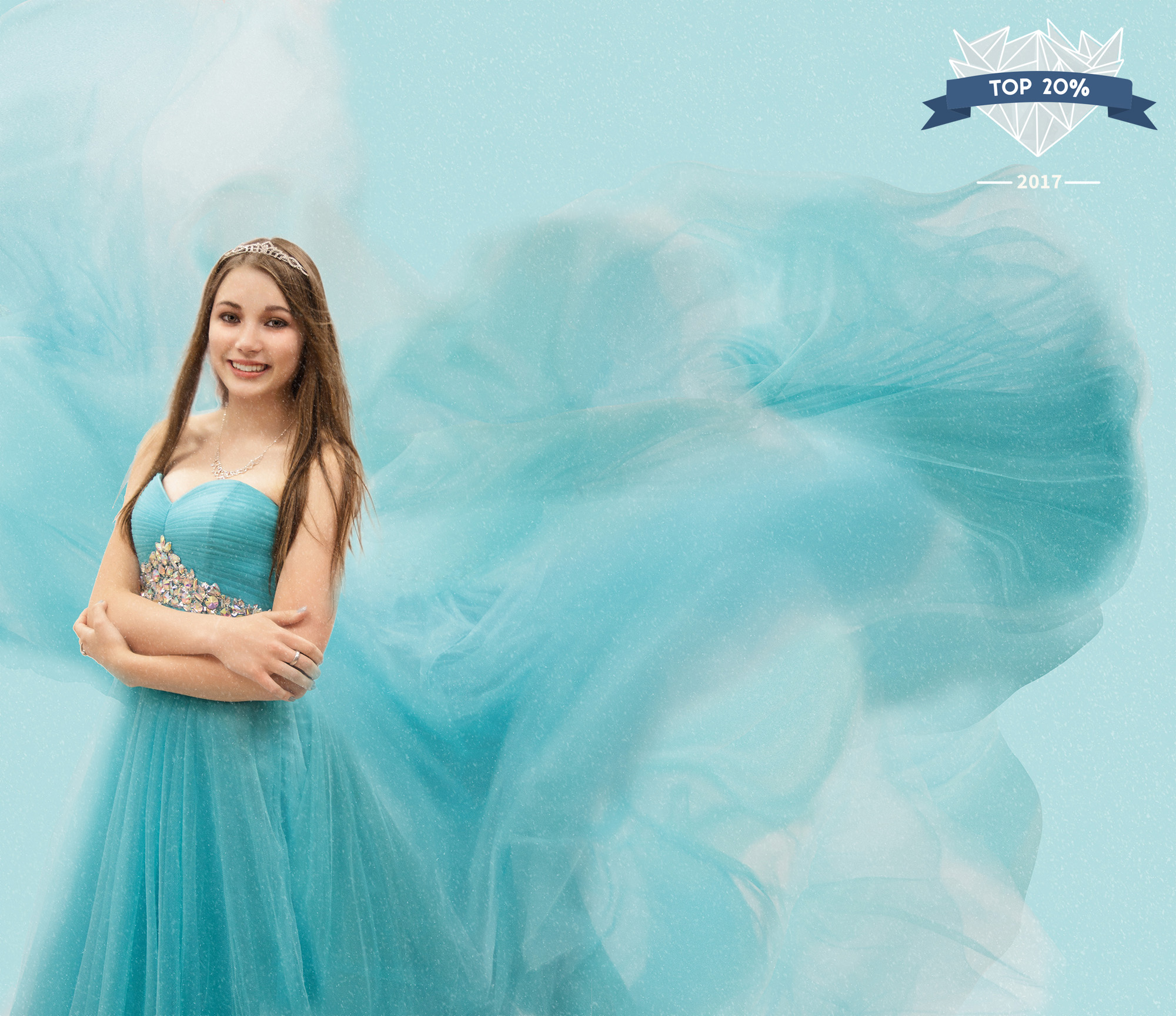 Round 7/12 Placed 2,494 out of 20,266 images in the Category: Seniors
Another secret. I knew going in with this one it would place high. I figured it would have gone to the 8 or 9 round so was a little shocked that it placed in the 7 round. Voting isn’t done just by professional photographers looking for best lighting / posing / editing style – it was everyone who knew about the contest and was based a lot on heart strings. Did the photo make you go ‘awwwww’ in the first few seconds? After that, it went down to the technical merits of the photo, or at least that’s how I voted on other photos! LOL! This photo is now a canvas of mine, HUGE CANVAS. I love this photo! I had been wanting to do something like this for about a year but you have to find the right dress to make this work and in walked Katerina. So with the help of her mom throwing the back of her dress in different ways and me photographing the dress falling in different directions, with one of my tools in photoshop called “Warp” – this happened. I work with the best seniors ever. Period. 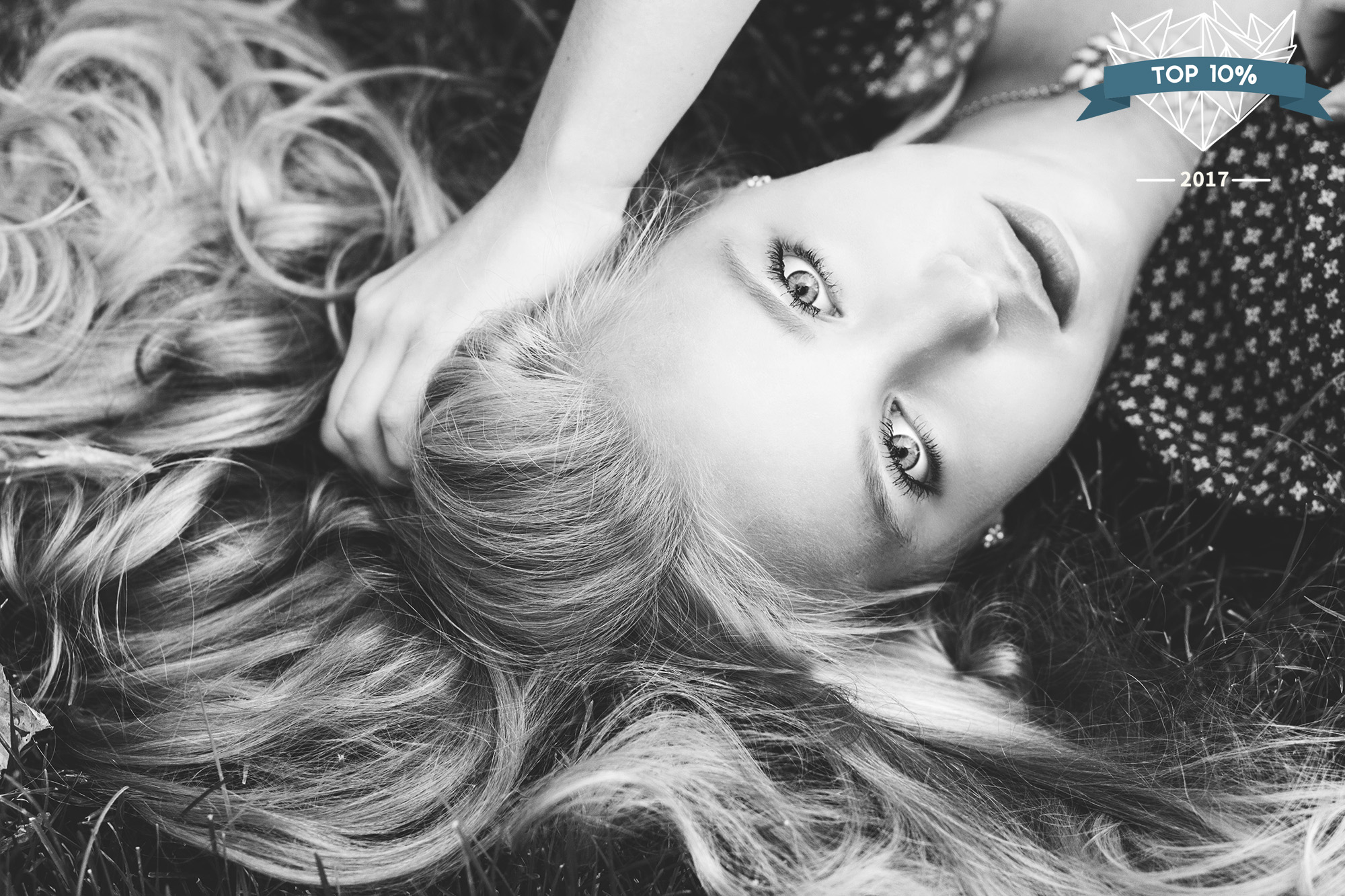 Round 9/12 Placed 1,355 out of 20,266 images in the Category: Seniors
Wow. Just wow. wow. wow. There are times when I take a photo that I will even catch my own breath and wonder what did I just do. In that moment I know that I have caught the favorite photo of the entire session. I know there will be other favorites but that moment, that pose, that photo will be the one that EVERYONE falls in LOVE with. I have been told by numerous mom’s that view these photos that “I have caught a glimpse of what their child will look like as a young adult”. It’s something that I don’t try to do all the time, I really want a well rounded set of images that says I captured you, all about you – but sometimes, this happens and it’s really breath taking. Jill. You are my muse!

Yes, I stopped at the 9th round – but 10th became the best of the best voting so I think I still placed very well with this photo and all my others.

Are you in awe too? Yes – me too. So take a look at the entire set of images I submitted – I’m already getting excited for next year and I promise to keep you in the loop so you can vote too! The next photo judging I plan on submitting too will actually be judged by certified master photographers. (biting nails)….